Ah, the classic donut. Or doughnut? Either way, donuts are a favorite treat in my household. Since going vegan, I’ve been missing good yeast donuts. I grew up buying a big yeasted, glazed donut whenever I went to the grocery store with my mom. So today, I’ll show you exactly how to make Vegan Chocolate Yeast Donuts at home!

These chocolate glazed donuts only use a few ingredients! The main ingredients are:

The first step to these donuts is prepping the yeast. In order for yeast to rise, it needs to be ‘fed’. Yeast is activated by warming it and ‘feeding’ it with a little sugar. You’ll want to warm your almond milk in the microwave (or on the stovetop) until it’s warm to the touch but not scalding. If the milk is too hot, it will kill the yeast.

You’ll want to divide the milk and sugar in half, and combine half of each into a small bowl. Once the sugar dissolves slightly, you can add in the yeast. It should bubble and froth up after a few minutes. If your yeast isn’t frothing up (like in the image above), then it’s likely not activated and it won’t rise the dough properly.

To make the dough, you’ll cream the remaining sugar and vegan butter together in a large bowl. Then, you’ll mix in the Just Egg (or Egg Replacer), nutmeg, vanilla, coconut oil, and the frothy yeast mixture. Once combined, you’ll gradually want to mix in the flour (about 1 cup at a time), until the mixture forms a soft dough ball.

A note about the egg replacer: my preferred method for making these donuts is with Just Egg or Bob’s Red Mill Egg Replacer. The texture is light and airy, yet rich. I’ve tried using a Flax Egg instead and the texture came out bread-ier. Not bad (and actually, my boyfriend really liked the texture), but it’s not as rich as the Just Egg.

Transfer the dough to a floured surface and knead it for about 4-5 minutes until the exterior surface is smooth and no longer sticky. The dough will need to rise after being kneaded. You’ll want to oil a bowl (with a little melted vegan butter, or cooking spray), then place the dough ball into the bowl.

To keep the dough from drying out, cover the bowl with a damp (but not soaking wet), paper towel or tea towel. In order to rise, the dough needs to be placed in a warm place for about 1 1/2 hours. I like to place mine in my microwave (make sure not to run it!) or in my oven (turned off).

The dough is done rising when you can poke it with your finger, and the indention stays in the dough (see image above).

Cutting Out the Donuts

After the first rise, turn the dough out on a lightly floured surface. With a rolling pin, roll the dough into a rectangle (or a blob shape like I did, haha!) about 3/4 of an inch thick.

Using a biscuit cutter, circular cookie cutter, or even a glass (about 2-3 inches in diameter), cut out your donuts. I got about 10 donuts out of my rolled out dough, and then re-rolled the scraps to cut out 2-4 more donuts. To cut out the hole, use a smaller cookie cutter (about 3/4 of an inch in diameter) or a tiny glass.

Transfer your cut out donuts to a parchment-lined baking pan and cover them back up with a damp towel. The donuts will need to rise for a second time, about 45 minutes until they are puffed up about double in size.

Time to fry! This part can be a bit intimidating, but don’t worry- I’ll walk you through a few steps you can take to feel more at ease. The first thing you can do to make frying easier is to use a very large stockpot. The taller the better! This will keep any oil that splashes or splatters away from you.

I also only use a few inches of oil to fry my donuts (instead of deep-deep frying them). This amount of oil makes me feel more comfortable and not like I’m going to start an oil fire. You can pour 3-4 inches of oil into your pot, enough so the donuts won’t touch the bottom of the pot, but not enough to splatter everywhere.

Heat your pot on low heat to start out. After a few minutes of heating up, drop a tiny piece of scrap dough or a donut hole into the oil. Watch it closely and once tiny bubbles start to form around all sides of the dough, the oil should be hot enough to fry.

Gently drop 2-3 donuts at a time, using a flat spatula, into the oil. Try not to fry too many donuts at a time, since this will drop the temperature of the oil. You’ll want to fry each side for 1-2 minutes until it is golden brown. If it seems like it’s taking more than 1-2 minutes per side, the oil may not be hot enough. Try increasing the temperature a little bit at a time until the donuts fry up in a shorter amount of time.

The longer the donuts sit in the oil, the oiler they will be when finished frying (not ideal). So it’s important to make sure your oil is hot enough! Once your donuts are done frying, transfer them to a paper towel-lined baking tray to soak up any excess oil.

While the donuts cool, you can go ahead and make the glaze. I like to melt my chocolate in the microwave since it’s the fastest and easiest method. You can add all your chocolate chips, coconut cream, and coconut oil to a medium-sized bowl. Heat them up for about 2 minutes, stopping every 30 seconds to stir the mixture to prevent burning.

Once the donuts have cooled, you can dunk one side into the glaze. Then place them onto a cooling rack to drip of any excess glaze. While the glaze is still wet, top the donuts off with some vegan sprinkles or chopped dark chocolate.

And there you have it! How to Make Vegan Chocolate Yeast Donuts. These bad boys are so delicious, decadent, fluffy, and chocolatey. They take a bit of time to make, but oh, it’s worth it! This recipe makes a pretty big batch, so you can definitely freeze any extras.

To freeze them with the glaze on, place the donuts (uncovered) on a baking sheet into the freezer for 10 minutes. This is just enough time for the glaze to harden so it won’t stick to the plastic wrap when wrapping them up. Make sure to tightly wrap the donuts to prevent any freezer burn. I like to wrap mine is plastic wrap and then place them in an airtight freezer bag.

If you’re in the mood for some more vegan desserts, check out these yummy recipes!

Cut Out the Donuts

Nutritional info is an estimate 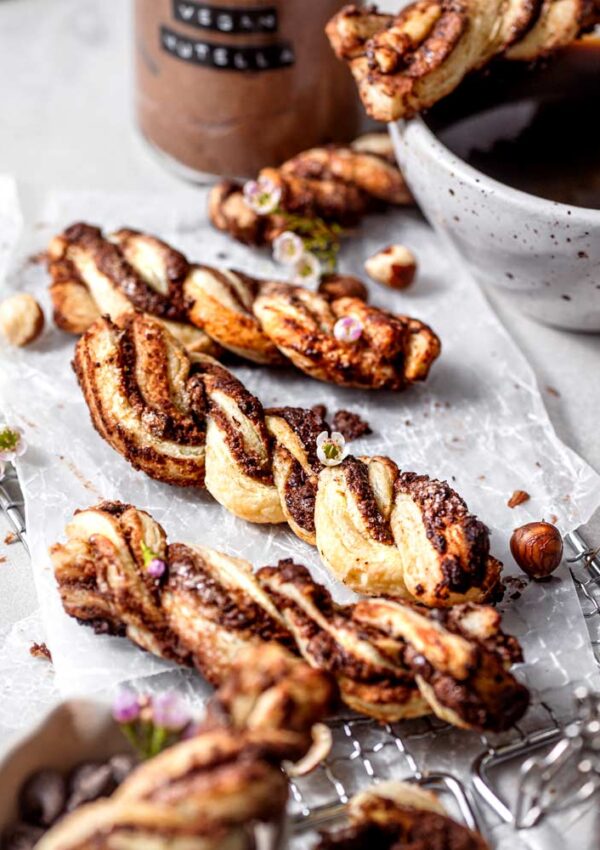 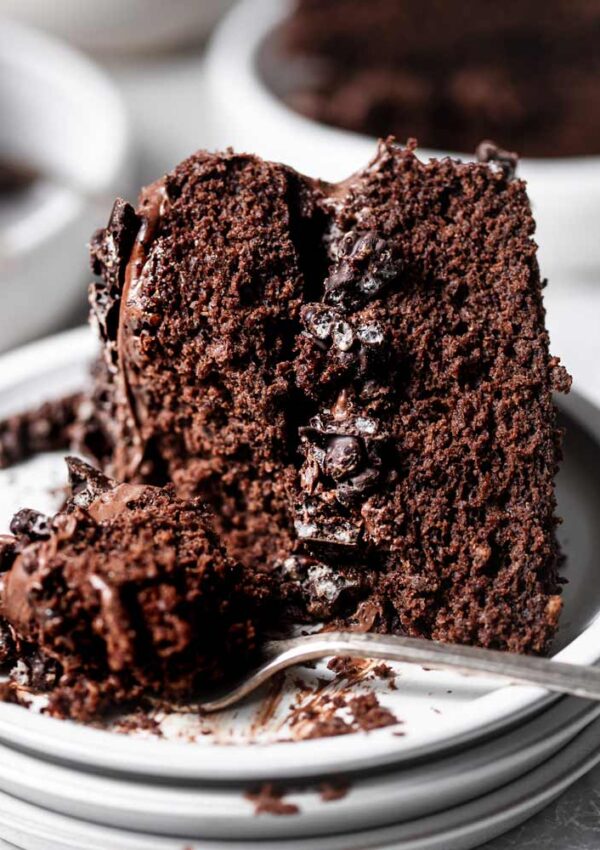 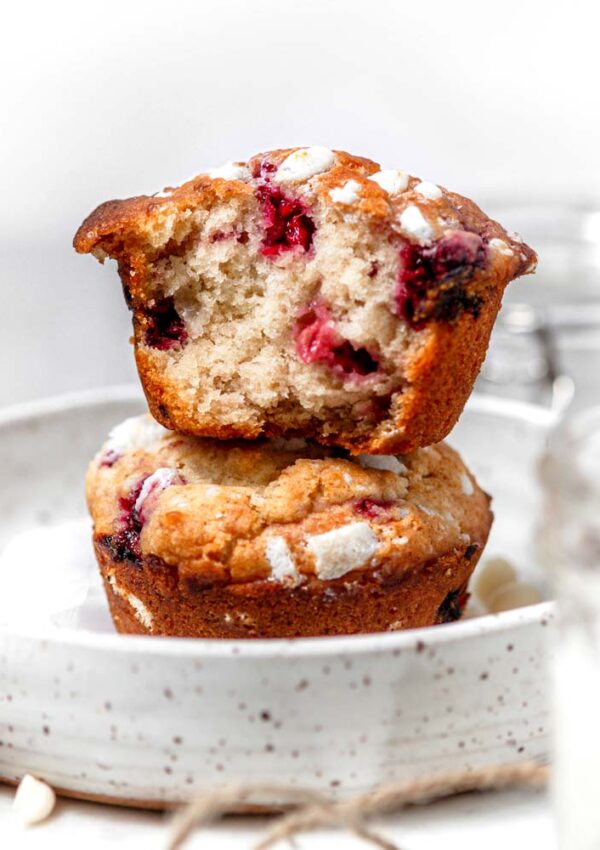 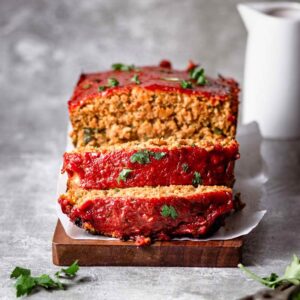 The Best Vegan Beyond Meat Meatloaf