Have some Just Egg you don’t know what to do with? Here are 31 creative and delicious Just Egg recipes & ideas! All of the following recipes are vegan-friendly and plant-based.

what is Just Egg?

If you’ve never used Just Egg, let me introduce you to it. Just Egg is a completely plant-based substitute for eggs that tastes like the real thing.

What makes this egg replacement so different from other vegan egg replacers is that it can actually be eaten on its own. (Versus just being used as an egg replacer in baking like flax seeds or chia seeds).

Just Egg replicates the taste and texture of real eggs. The color also replicates what you’d get if you were to whisk up or scramble a chicken egg.

I wish this was sponsored but alas, I just love this product and have been using it for years.

Other vegan egg substitutes I’ve used in the past that come close to Just Egg are tofu scrambles. Soft tofu mixed with a little black salt (kala namak) creates an eggy taste. And if you add in some turmeric for a golden color, it looks similar to storebought Just Egg.

The company JUST has a few different egg substitute products.

The company’s main product is their bottled Just Egg which replicates liquid eggs.

They also sell precooked folded ‘eggs’ which can be found in the freezer section of your grocery store. You can actually pop these in the toaster or microwave to quickly cook them and add them to sandwiches.

The main ingredients in Just Egg are mung beans and turmeric.

Yellow split mung beans are a popular ingredient in Southeast Asian cuisines. They’re found in dishes from daal to curries. They’re also a great source of protein, hence why they make a great main ingredient for Just Egg.

The full ingredients are below:

How to use just egg

Can Just Egg be used in baking?

Just Egg can be used in a variety of baking applications. It mimics the properties of a whisked chicken egg (yolk plus egg white), so it won’t work well in applications that call for only egg whites. In past experience, Just Egg is a great vegan egg replacer in dough-based baked goods like breads, doughnuts, and cakes.

How much Just Egg is equivalent to one egg?

How much does Just Egg cost?

The price of Just Egg will vary based on location. At my local grocery stores, it will range from $3.99 to $4.99 per bottle.

How Long does Just Egg last?

Once opened, from my experience, Just Egg lasts in the fridge for about 5-6 days.

Can Just Egg be Frozen?

Yes, Just Egg can be frozen prior to cooking and after cooking. The liquid Just Egg will separate a bit after thawing, so keep in mind the texture may not be the same.

Where can I buy Just Egg?

Want to save these ideas for later? Pin this image to Pinterest!

Without further ado, here are 31 creative recipes with Just Egg! These recipes are categorized between breakfast, baking & desserts, and savory eats.

First up are recipes using Just Egg for breakfast, brunch, or brinner! These recipes are both sweet and savory. They include staples like pancakes and waffles to more creative ideas like breakfast tacos!

This Just Egg French Toast is made with an eggless and dairy-free custard and has hints of cozy cinnamon, vanilla, and maple.

This vegan breakfast sandwich uses french toast as the bread and is filled with Just Egg, vegan sausage, and vegan cheese. How fun!

These vegan egg muffins are an easy and savory breakfast dish packed with flavor from the sundried tomatoes and crumbles of vegan feta.

This Just Egg Quiche is vegan and incredibly easy but tastes just like the traditional kind! It uses a bottle of Just Egg and is filled with vegan sausage, vegan cheese, bell peppers, and green onions for savory flavor in every bite.

This vegan eggs benedict is hearty and so easy to make thanks to the Just Egg! It’s also complete with a homemade dairy-free hollandaise sauce.

These vegan breakfast tacos are hearty and filled with Just Egg scramble, beans, avocado, and lots of veggies!

This Just Egg Omelette is ready in 10 minutes, and stuffed with veggies!

If you love a hearty breakfast, this vegan breakfast casserole is for you. It’s made with lots of tasty seasonings, shredded potatoes, and a handy dandy bottle of Just Egg.

This cinnamon raisin vegan french toast casserole is sweet, warm, easy to make, and a delicious brunch or dessert. Top this tasty breakfast casserole off with vanilla bean icing, maple syrup, and/or fresh tart berries. Sub the banana for the same amount of Just Egg to make the custard!

This Southwest Vegan Breakfast Burrito is loaded with veggies for a healthy, and delicious breakfast. Sub the tofu scrambled ‘eggs’ for Just Egg scramble.

Fluffy, soft, completely egg-free & dairy-free, these vegan buttermilk Belgian waffles will be the highlight of your weekend mornings! Sub in 6 tbsp of Just Egg for the flax eggs for fluffy waffles you’ll want to make every weekend.

A cozy vegan breakfast for fall or winter, this pumpkin spice french toast uses Just Egg in the batter and is layered with cinnamon & pumpkin flavor.

These vegan Bisquick pancakes are fluffy, slightly sweet, and panfried to get the best crispy, golden brown edges. This recipe doesn’t require eggs or an egg substitute, but you can add in a 3 tbsp of liquid Just Egg for an even fluffier, soft texture!

Can Just Egg be used for baking? Yes, it can! I’ve used Just Egg in a variety of baking recipes. In my experience, it works best in dough-based recipes like bread, donuts, and cinnamon rolls. Below are some super yummy Just Egg Baking Recipes!

Fluffy, airy, and topped with a decadent chocolate glaze with sprinkles, these vegan yeast donuts are fried to perfection.

This vegan lemon curd only uses 6 ingredients. It’s rich and tangy and tastes just like that made with egg and dairy!

These vegan everything bagels (without yeast) are ready in under 30 minutes. These bagels use Just Egg as the vegan egg wash which holds the everything seasoning onto the dough and creates a lovely golden color.

The best vegan cranberry babka, topped with a non-dairy cardamom cream cheese icing. This sweet braided bread is perfect for winter baking or the holidays!

This vegan cheesecake is so luscious, rich, and decadent. Super creamy and the Just Egg helps create a texture that tastes like the real deal!

Just Egg isn’t only useful in breakfast or baking recipes. You can definitely use it in super savory recipes for dinner or lunch too.

Comforting, hearty, tangy, and ‘meaty’- this is the best vegan Beyond Meat meatloaf. This lentil-free vegan and vegetarian meatloaf recipe has the most convincing taste and texture! Just Egg is used as the binder in this vegan meatloaf.

This Vegan ‘Egg’ Sushi by the Korean Vegan is bursting with authentic flavors thanks to the Just Egg being cooked with scallions, jalapeño, and chopped carrot!

These Vegan Peanut Noodles are super easy to make. They have slightly chewy rice noodles that are coated in a creamy, flavorful savory peanut sauce and loaded up with lots of veggies. Just Egg takes the place of scrambled egg in this recipe.

Sub in Just Egg for the tofu scramble and you have yourself an easy vegan quesadilla that’s ready in about 25 minutes and is completely customizable. You could make this for breakfast, lunch, or dinner!

This Vegan Spaghetti Carbonara is simple, completely plant-based, and ready in under 30 minutes.

This vegan egg roll in a bowl has lots of green & red cabbage, marinated tofu, and baked egg roll wrapper toppings, with a savory sauce. Add in some cooked Just Egg for extra protein!

This 7 ingredient vegan corn pudding is buttery, sweet, and custard-like. It makes the perfect side dish for Thanksgiving or Christmas.

You only need 3 simple ingredients to make your very own vegan egg pasta noodles!

Last but not least is the tried and true Just Egg scramble. I feel like I couldn’t have a round-up of Just Egg Recipes without including a vegan version of scrambled traditional eggs. It’s not the most creative recipe, but it is the most frequent method of cooking Just Egg in my household!

How to make the scramble:

Pour a bottle of Just Egg into a non-stick pan or a well-seasoned cast iron pan. You can add a bit of olive oil or vegan butter if you’d like. You can also sprinkle on vegan cheese or vegan bacon. Heat the Just Egg on medium-low for 5-7 minutes, stirring occasionally until cooked through.

And voila! There you have it. 31 creative and delicious vegan Just Egg recipes. (Well, 32 if you count the scrambled Just Egg).

If you have a go-to recipe you use this product in, I’d love to know. Leave a comment below and let us know how you use Just Egg! 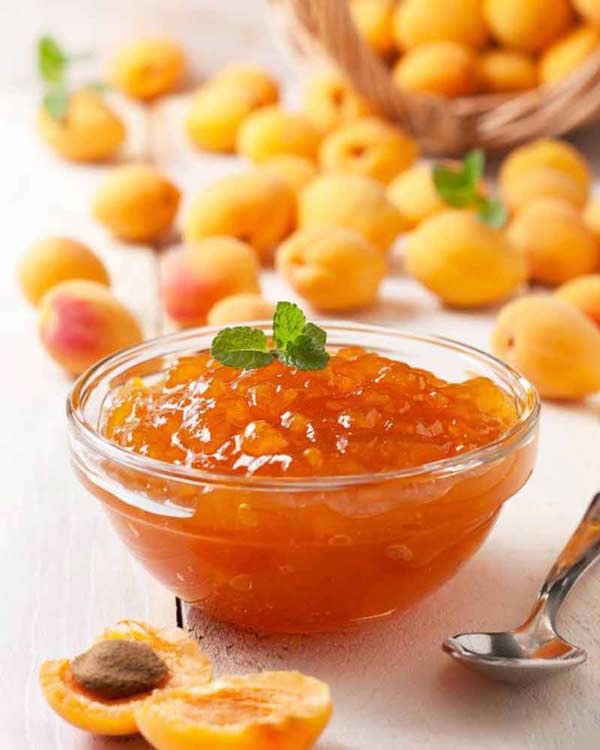 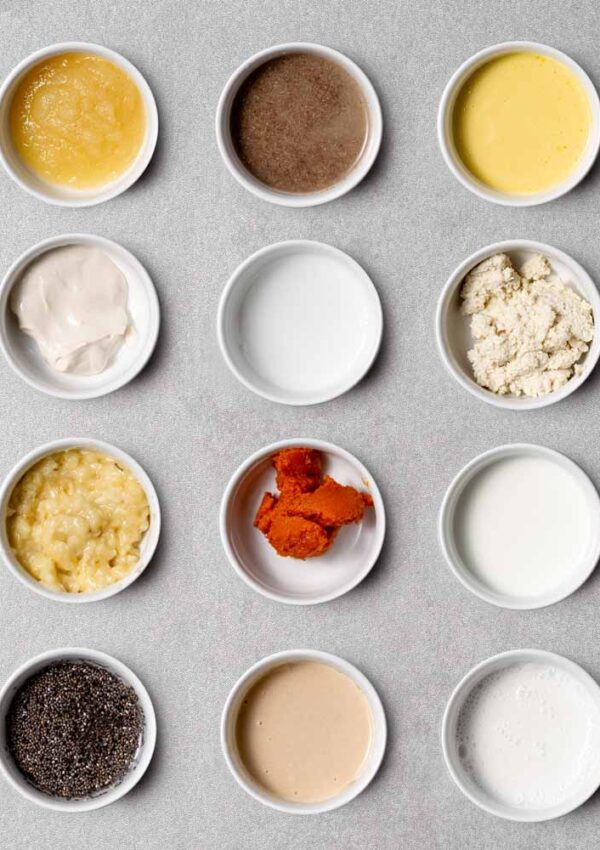 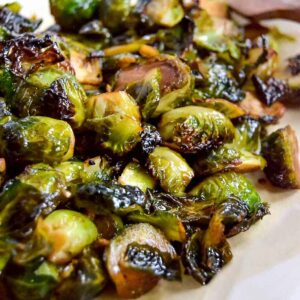